The Day I Almost Died

I remember that day very clearly.  Our son, Jackson, was sick and needed to see his pediatrician.  It was a Saturday morning and they only stayed open until noon.  I woke up not feeling well.  I would have had my husband, J.C., take him but he was out of town with my brother.  I dressed myself, then Jackson and we headed to the clinic.

It's hard to describe how I felt but I do know one thing, it wasn't good.  At one point, before we got called back to see the pediatrician, we made our way to the bathroom.  There was a pain in my stomach that was so intense I thought I might faint, right there on the bathroom floor.  I told myself, "get yourself together... you cannot pass out in a doctor's office bathroom with the door locked... your 15 month old child won't have a clue what to do and they'll have to kick the door down to get to him... and nobody would know that I was in here... passed out."  I caught my breath and we went back to the waiting room.

The nurse finally called us back and we quickly saw the doctor.  Just as I suspected, an ear infection and croup.  He prescribed some antibiotics and we headed to get them.  The "feeling" that I had would come and go.  We made it back home and I laid down on the couch.  If you have ever been around a busy one year old, you know laying on the couch isn't really a thing you can do... but I did.  I kept trying to call my husband to ask him if he could come home but he didn't have any cell phone service.

As the day passed, the pain wasn't letting up.  I sent a text message to my best friend, who happens to be a nurse, and described my symptoms the best I could.  We were "convinced" that it was a kidney stone and that if I drank a lot of water over the weekend, that would probably get me through and I could see my doctor on Monday.  Our church choir would be performing that evening, our yearly Christmas cantata.  I had a solo part and J.C. had an acting role as a wiseman.

He finally arrived home and asked me what was wrong.  I explained to him that I hadn't felt well all day and that Jackson had basically been fending for himself all day.  Knowing that was totally out of character for me, he asked me what we should do.  After a little time passed, I asked him to contact the cantata director and tell her we wouldn't be coming.  We then text my sister-in-law and asked her to meet us at the emergency room parking lot so that she could take care of Jackson. 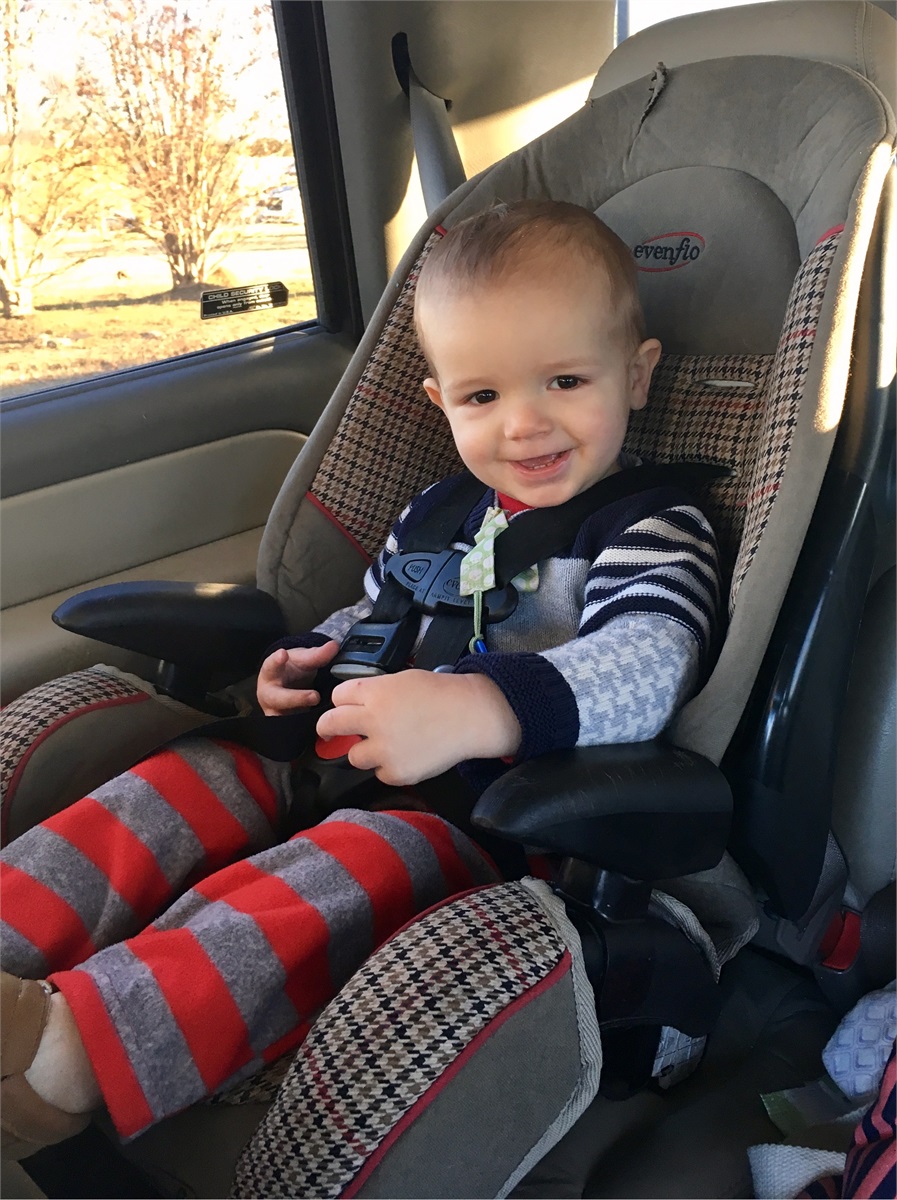 (We were in such a hurry to get to the ER that Jackson's clothes weren't anywhere near matching!)

I was admitted to the ER and things progressed very quickly.  They asked me if there was any chance I was pregnant (absolutely not), where the pain was located, how long had I been in pain, etc., etc., etc..  They took blood work and a urine sample.  Before we knew it, the ER doctor and a nurse were standing in our room giving us the news.  "Mrs. Ross, your urine analysis came back negative for infections but positive for pregnancy."  I literally could not comprehend what they had just told me.  Did they mean that J.C. was pregnant?  Because there was no possible way I was!

As soon as my brain could process what they had told me, I knew things were bad.  No pregnancy should come with that much pain.  They put me in a wheelchair and wheeled me back to have an ultrasound.  One of my greatest fears was coming to fruition.  The nurse that performed my ultrasound and the doctor agreed, I was pregnant and the baby was in my tube.  An ectopic pregnancy.  People die from this.  It's really serious.  One of the people that I was closest to as a child was fine one day and gone the next... because of an ectopic pregnancy.

Before I even knew what was going on, doctors and nurses started to flood that tiny ER room.  They brought me a gown and instructed that I put it on immediately.  An IV went in my arm and my emotions were out of control.  I might not ever wake up from this surgery.  I'll be leaving J.C. behind, to raise Jackson all by himself.  My best friend, who is an OR nurse at our local hospital, came rushing in.  She told me that I was in wonderful hands and that she'd see me when I got to recovery.

They wheeled my bed into the operating room.  It was cold, the lights were bright and the nurses seemed to be rushing around in a very hurried manner.  It was serious.  I could tell by the look on their faces.  The good Lord brought me through surgery and I came to as they were taking me to the ICU to recover.  I stayed in the hospital for a few days and then went home to recover. 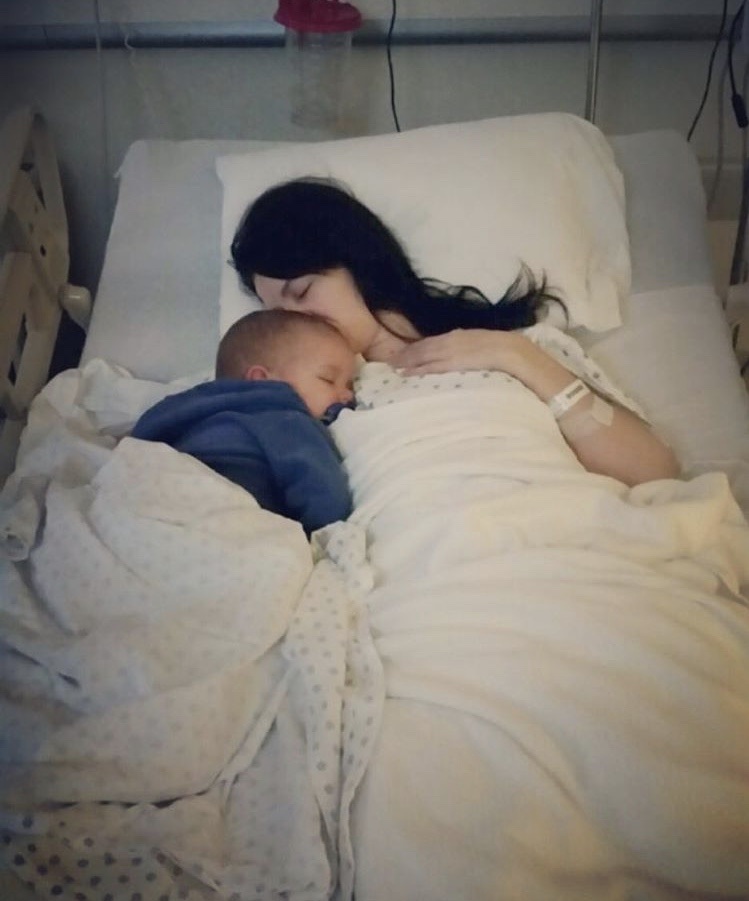 (Jackson came to visit me while I was in the hospital and we ended up taking a nap together.)

When I finally became clear headed, I was so glad to know that I'd been given the privilege to raise my son, alongside my husband.  But I also know this... they would have been okay without me... eventually.  You see, I had gotten a life insurance policy that would take care of the bills, allow J.C. to hire help when he needed it, give him a chance to take off work to heal, send Jackson to college and maybe more.  Money doesn't make problems or pain go away, but it's nice to know that he wouldn't have been struggling financially if I hadn't made it.

If you died tomorrow, would your family be able to carry on?  Would there be enough money to pay for your funeral expenses and replace your income?  Maybe you don't "bring home" any money because you are a stay-at-home mom, but would there be money to cover the tasks you tackle every single day?  If not, please don't wait.  Go ahead and insure yourself while you are young and (hopefully) healthy.  Call us today at 870-304-2500 to get this easy process started!